How loud is a gunshot?

When evaluation the noise levels of a firearm the first thing to look at are the characteristics of the sound. Typically, firearms are an impact noise opposed to a sustained noise from, let’s say, a foghorn. The impact noise from the gun is caused by a rapid expansion of gasses, like that of a bomb. These intense impact noises from a gun can reach intensities of 140 dB SPL (sound pressure level) and even higher.

The noise from a gun firing is particularly detrimental to the human ear, the reason for which is the fact that gunshot noise typically resides in the 2-3 kHz range. The human ear has evolved to be most attune to the frequency that speech resides in which happens to be in this same range. OSHA (Occupational Safety and Health Administration) requests that any workplace is 90 dBA over the course of an 8-hour day. The total impact noise level can not exceed 140 dB SPL.

The Forensic Science Division of Hellenic Police in Athens, Greece conducted experimental shootings in 2008 at 382 meters above sea level to measure the noise level of the firearms. The sound level meters were placed at selected points behind the shooting position. The distances used for the microphones during the sound level measurements were 9.60 m (31.5 ft), 14.40 m (47.25 ft), 19.20 m (63 ft), and 38.40 m (126 ft). The following graph shows the reduction in sound level for each doubling of distance, which within reason follows as expected when examining the inverse square law. Sound is expected to reduce by 6 dB for each doubling of distance measured. 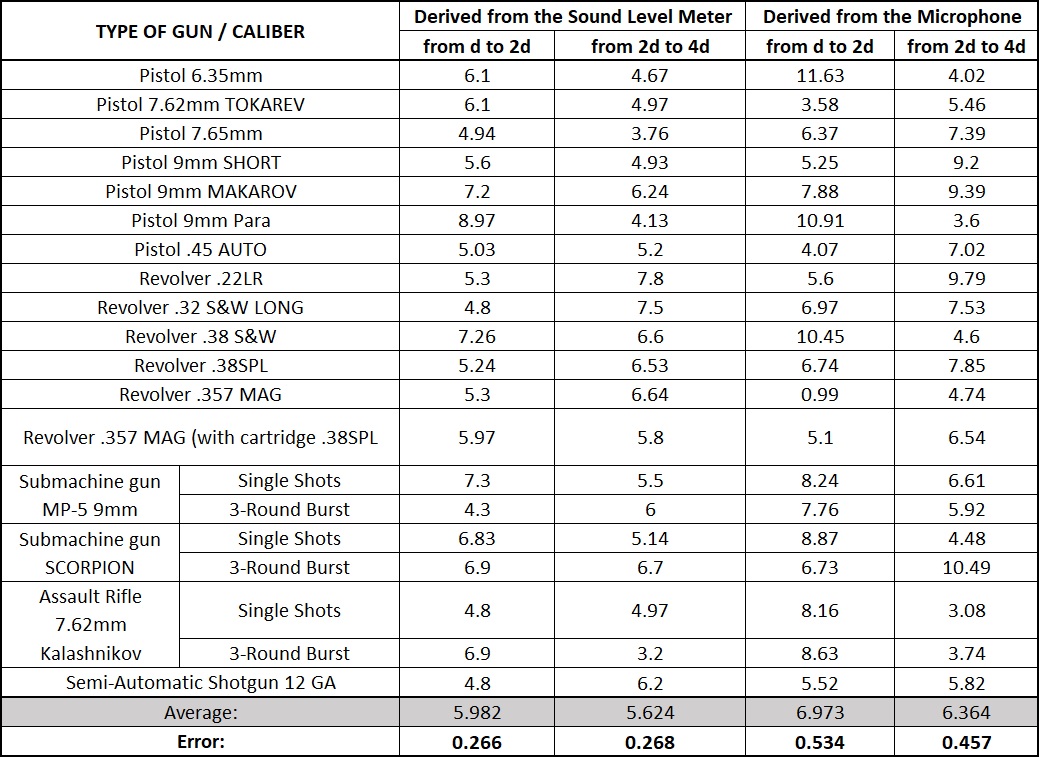 NOISH Study on 10 Firearms both Indoors and Outdoors

The National Institute for Occupational Safety and Health conducted a study titled Assessment of Noise Exposure for Indoor and Outdoor Firing Ranges in which they measured the noise levels of ten firearms. The microphone was placed 1 m to the left of the shooter. Below are two tables showing the models of each gun analyzed as well as how many shots were measured for each weapon. Measurements were taken both indoors as well as outdoors.

As expected, the guns when fired indoors were measured to have higher sound levels than those fired outside. This is due to less reflections outdoors than when fired between reflective walls. The following graph shows the noise level measurement of a .357 Smith & Wesson 586 Pistol fired outdoors. The red line on the graph shows the unmitigated firearm noise level and the blue line shows the noise level to a human head in the same location with hearing protection, showing how critical that protection is when firing weapons. 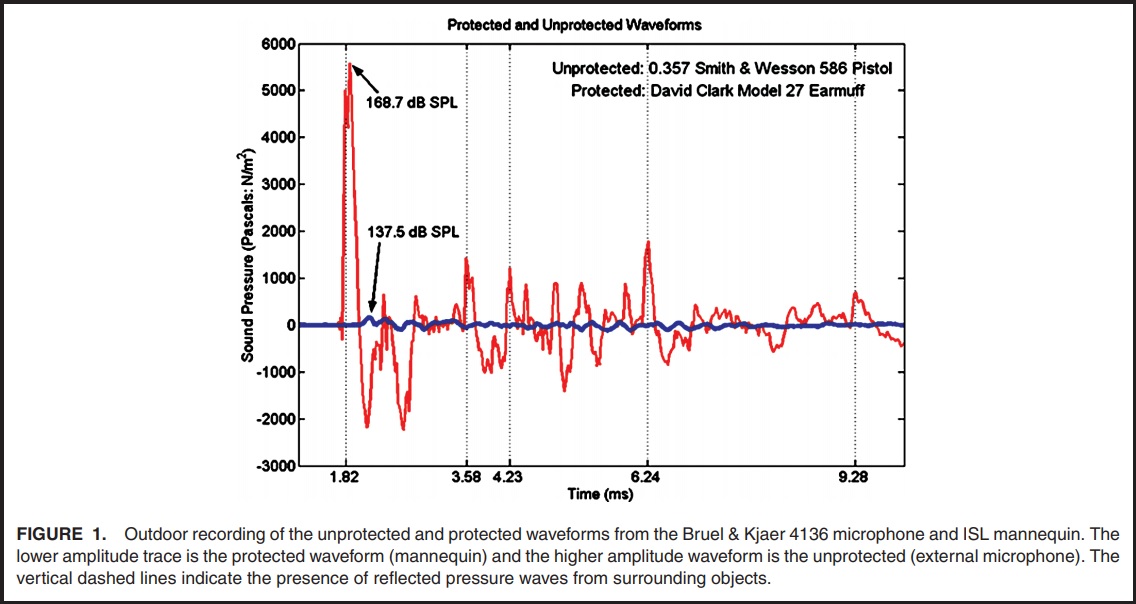 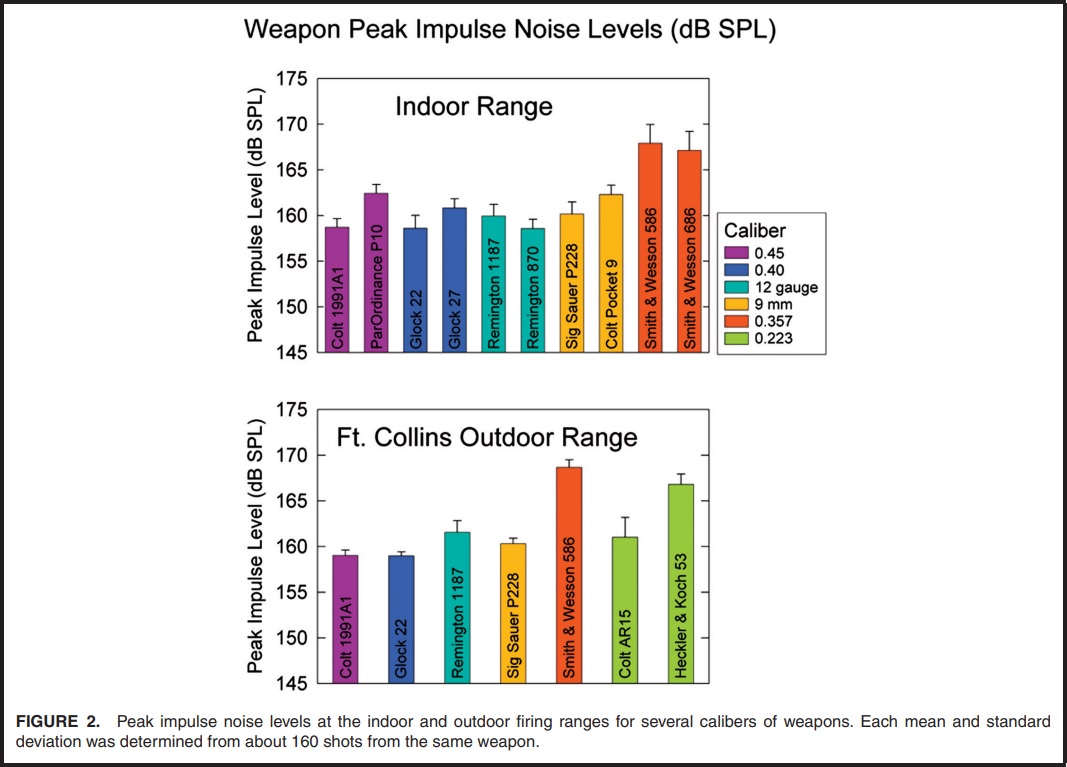 Spectral analysis was also conducted on each of the firearm noise. Most of the weapons were measured to have the maximum sound level occur between 500 and 800 Hz. The graph below displays the results of this analysis. The horizontal lines in the chart represent 10 decibel intervals; the dark bar at the center of each spectrum is the 1000 Hz band. 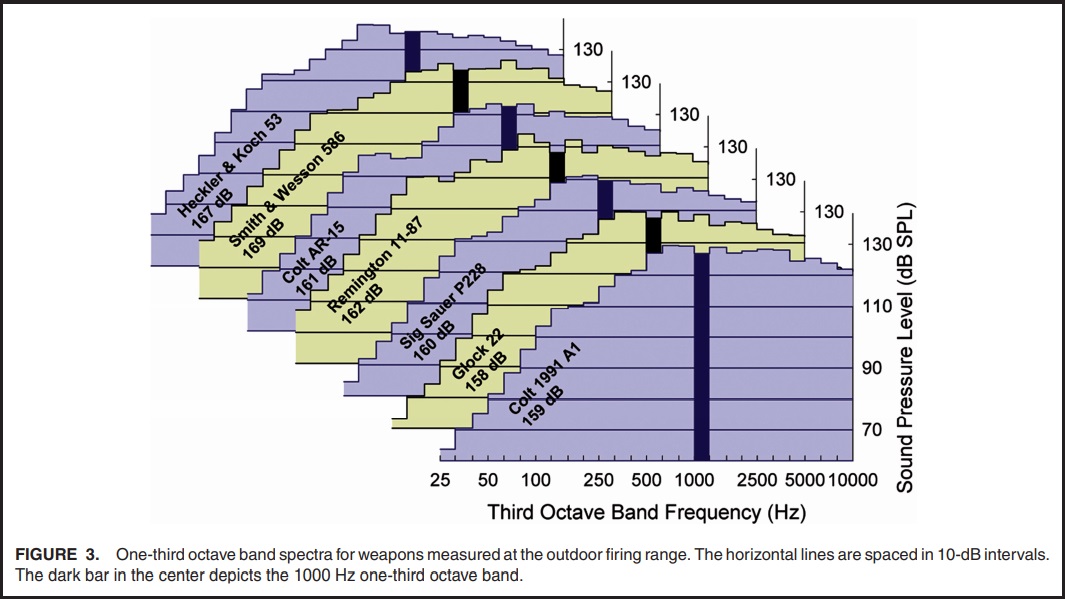 The recommended sound level exposure level by NOISH states that you should not be exposed to impulse noise levels above 140 dB for any amount of time. The measured peak noise level measured where one would expect the shooters ears to be well over 140 dB with no hearing protection. When measured with protection measurements consistently recorded an average attenuation of 30 dB.

How loud is a decibel? 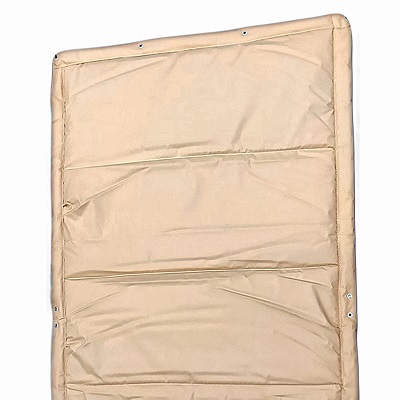